Whooping Crane 14-12 has been seen again in Michigan.  A combination of colored leg bands identifies this as male number 14 released in 2012.  He was costume-reared at the International Crane Foundation before being released at the Horicon National Wildlife Refuge, Wisconsin as part of program to establish a migratory Whooping Crane population in the eastern North America.  Shortly after being released, he joined some Sandhill cranes and migrated with them to Florida.  So-far things were going as planned.

However, when spring 2013 came (and 2011and 2015), instead of returning to Wisconsin, he went to Berrien County, Michigan and then moved to Allegan County.  In September 2013 Chuck Mekbel (photo below) found him at the Schoonover Waterfowl Production Area, Lenawee County and then he moved to Spring Arbor Township, Jackson County along with many birders, found him at the Lenewee County site.  It will be interesting to see if he is spotted this fall in Michigan.

Although this magnificent bird has thrilled many Michigan birders, it is unfortunate that he will not find a mate here.  Every year it is hoped he will find a female whooper in Florida and follow her back to Wisconsin, or better yet, bring her back to Michigan. 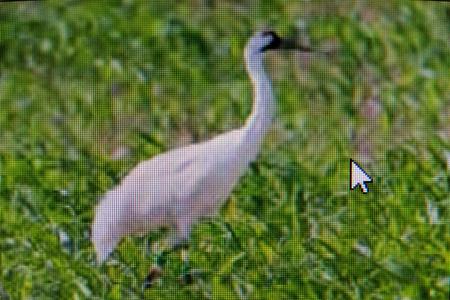